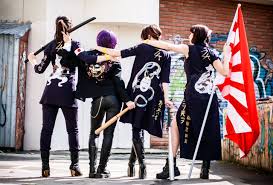 Bosozuku (‘violent run tribe’) consists of biker gangs which rebel against the strict rules of Japanese cultural in favor of a life on the road. Also known as the ‘kaminari zoku’ (thunder tribes) when it began in the 1950s, the group focuses on disrupting traffic in any way possible including running red lights, driving recklessly including speeding and traffic weaving, illegally modifying their bikes and ignoring noise restrictions.Members are traditionally characterized by their modified motorcycles which often include elements from American choppers and British café racer style bikes, as well as their elaborate costumes. 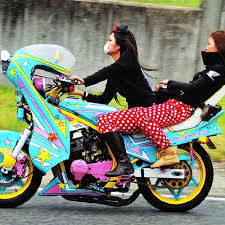 The women of these Japanese gangs say they are breaking away from gender stereotypes by challenging the domestic roles expected of women in modern Japan.In their own words, they are all about proving that ‘Japanese women can wipe their own ass’

Many of the female members were introduced to the gang culture from ex partners before deciding they wanted to ride as well, the video explains.The gang’s activities are focused on road disruptions: running red lights, driving recklessly including speeding and traffic weaving, illegally modifying their bikes and ignoring noise restrictions, particularly when modifying their bikes. But they have also been linked to gang violence. The girls are also out to prove that the subculture is not a dying one, despite Japanese National Police Agency reports stating that the number of recognized Bosozoku members nationwide, hit a record low of 7,297 in 2012. 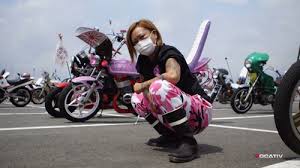 This is down from the recorded 42,500 members at the subculture’s peak in 1982, according to the Japan Times.

The reduction in member numbers is considered to be a result of a police crackdown and subsequent road traffic law revisions in 2004, which gave more power to police.

Motorcycle gang members are so used to evading police, whom will target riders just for wearing a identifiable Bosozoku uniform, that members bikes are designed to help lose police cars in a chase. For this reason, handlebars are bent downward and inward in order to allow riders to weave between traffic.

Thank you for subscribing.

We respect your privacy and take protecting it seriously